Jawbran De Polkadot is one of the 11 racers in the game Sugar Rush Speedway 2. His central theme is jawbreakers. His signature kart is the Gobstopper.

“Tough as a Jawbreaker, Soft as Gum”

Jawbran can be tough on the track. Sometimes willing to pound anyone in front of him. But once you get to know him, he can be as sweet and soft as bubblegum.

Jawbran De Polkadot is a young boy with peach skin, light-red cheeks, blonde hair, and light-blue eyes. He has a jawbreaker cap. His jacket is multicolored with blue rims and green stripes. His t-shirt is made up of colorful circles that resemble the gobstopper box pattern. He wears yellow tights and dark blue boots with rainbow candy bacon leggings. When racing, he wears a jawbreaker, but with a light blue visor. 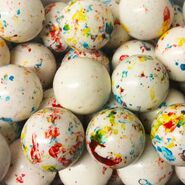 Jawbran next to his kart, the Gobstopper
Add a photo to this gallery
Retrieved from "https://wreckitralph-fanon.fandom.com/wiki/Jawbran_De_Polkadot?oldid=73420"
Community content is available under CC-BY-SA unless otherwise noted.