NeapolitaCreamwichis one of the 11 racers in the game Sugar Rush Speedway 2. Her theme centers around Neapolitan ice cream sandwiches. Her signature kart is the Triple Deluxe.

Neapolita Creamwich, is the socially awkward girl who tries to make friends with everyone, especially those who love racing as much as she does. However watch out! ‘Cause on the track, she shows a completely different side!

Neapolita Creamwich is a young girl with tan skin, brown eyes, pink cheeks and lips, and curly brown hair. She wears a brown racing jacket with fuzzy arm cuffs and a neapolitan ice cream on her white t-shirt and a brown cupcake skirt. She also wears a headband made out of a neapolitan coconut candy bar, brown, cream, and pink tights, cream leggings, and brown boots. When racing, she wears a Neapolitan helmet with pink visor. 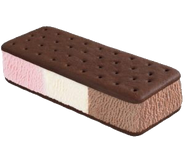 Neapolita with her kart, the Triple Deluxe

Neapolita Creamwich’s stats when selected
Add a photo to this gallery
Retrieved from "https://wreckitralph-fanon.fandom.com/wiki/Neapolita_Creamwich?oldid=73150"
Community content is available under CC-BY-SA unless otherwise noted.