Sundae Lil’ Cone is one of the 11 racers in the game Sugar Rush Speedway 2. Her theme centers around Drumstick ice cream. Her signature kart is the Drumstick.

Sundae is a shy girl who takes no nonsense! She may let a few things slide here and there, but some things she does not have the time or sensibility for.

Sundae is a young girl with pale sand-like skin, rosy cheeks, one blue and brown eye, and a blonde ponytail. She wears a small waffle cone with fudge on top and nuts surrounding it. Her jacket is brown with white stripes and her t-shirt is plain white. She also wears a waffle cone skirt with brown leggings with light brown dots. When racing, she wears a drumstick ice cream helmet with a light brown visor, along with her cone sticking out. 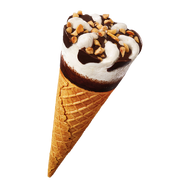 Sundae with her kart, the Drumstick
Add a photo to this gallery
Retrieved from "https://wreckitralph-fanon.fandom.com/wiki/Sundae_Lil’_Cone?oldid=73415"
Community content is available under CC-BY-SA unless otherwise noted.