Velveta Von Rose is one of the 11 racers in the game Sugar Rush Speedway 2. Her central theme is red velvet cake. Her signature kart is the Velvet Inferno.

”Don’t Judge a Book by its Cover”

Velveta Von Rose is the living definition of “don’t judge a book by its cover”. She may look posh and pretty, but on the track, she’s a down and dirty racer!

Velveta Von Rose is a young girl with pale skin, light-mahogany cheeks and nose, light-brown eyes, and dark red hair tied in 2 pigtails with cupcake frosting on the side of her hair. She wears a cream poofy vest with a red bow and wears red gloves. She also wears a red t-shirt with a red stripe swirling down, a dark-red cupcake skirt, cream tights with vertical lines, and dark-red boots with frosting on them. When racing, she wears a Red Velvet cake pop helmet with a mahogany visor. 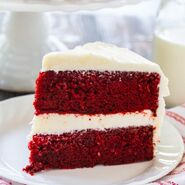 Velveta next to her kart, the Velvet Inferno

Velveta Von Rose’s stats when selected
Add a photo to this gallery
Retrieved from "https://wreckitralph-fanon.fandom.com/wiki/Velveta_Von_Rose?oldid=73436"
Community content is available under CC-BY-SA unless otherwise noted.